Discover the secrets hidden in the pyramids for centuries Advertisement
Pyramid Solitaire Saga is a new casual game from King.com (Candy Crush Saga, Farm Heroes Saga) in which you have to explore the mysteries of the ancient Egyptian ruins, playing a very fun form of simplified solitaire.

The mechanics of Pyramid Solitaire Saga are very simple: the players have a deck of cards in their hand and one card is face up. The goal is to collect all of the cards that are face up on the table, as long as those are one higher or one lower than the one you have played.

Using this gaming system, you have to advance through a map full of different levels where you can compare your score with that of other players. In fact, you can synchronize the game with Facebook to share rewards.

Pyramid Solitaire Saga is a game developed by King.com, the kings of casual games. It combines the habitual social elements of these games with the mechanics of the Solitaire game that has been around forever.
Reviewed by Andrés López Translated by Erin Teske
Advertisement

Why is this app published on Uptodown?
(More information)

latest version not yet available

What is the prize for those who reach the end of the game?

When I changed my phone, I kept my Facebook credentials, my levels were pulled up and there were no boosters, what should I do?

I don't understand why I can't play with the tablet with Facebook the game doesn't open and doesn't keep me going I like the game but if it continues like this it ends up that I don't play anymore tha... 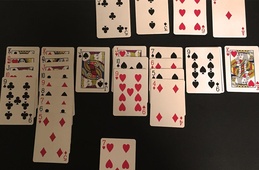 Zynga Poker
The most popular poker game now in your pocket
Tongits Go
Play fast and fun games of Tongits
Animation Throwdown: TQFC
A card game with characters from Futurama and Family Guy
The Horus Heresy: Legions
Lead a legion to victory across the galaxy
Harpan Solitaire
Yet another version of this classic card game, and it's still fun!
UNO!™
Classic UNO™ fun for your Android!
Governor of Poker 3
A multiplayer poker game in the Wild West
Teen Patti - Indian Poker
Face your opponents in this Indian poker game